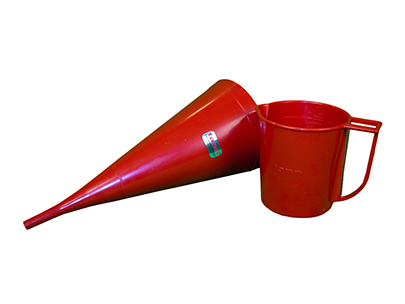 The Marsh Funnel is a simple device for indicating viscosity on a routine basis. When used with a measuring cup the funnel gives an empirical value for the consistency of a fluid. The number obtained depends partly on the effective viscosity at the rate of shear prevailing in the orifice and partly on the rate of gelation.

Funnel Viscosity is the ratio of the speed of the sample fluid as it passes through the outlet tube (the shear rate) to the amount of force (the weight of the fluid) that is causing the fluid to flow (the shear stress). Marsh Funnel viscosity is reported as the number of seconds required for one quart of sample fluid to flow out of a full Marsh Funnel.

In addition to the Marsh Funnel, the viscosity measurement procedure requires a graduated container (Measuring Cup) to receive the fluid as it flows out of the funnel, a means to measure elapsed time (stopwatch), and a thermometer for measuring the temperature of the sample.